Everybody knows who Malala is, but do you have any idea about the awesome things that Satyarthi has done?

Here are 10 things that you must know about him: 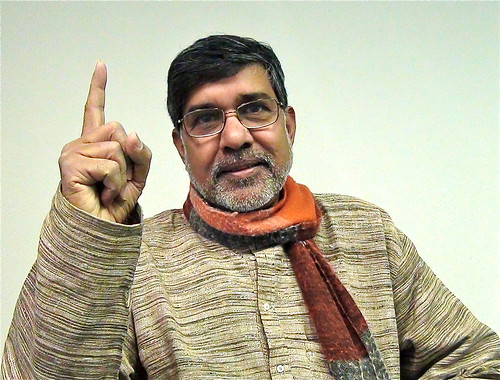 2. 60-year-old Satyarthi is the 8th Nobel Laureate born in India.

3.  He gave up a promising career as an electrical engineer when he was all of 26 to dedicate his life to help kids forced into slavery.

4. The founder of Bachpan Bachao Andolan, he has helped free around 80,000 children from the clutches of slavery and child labour.

5. He also rescues women from enslavement in filthy factories with deplorable conditions and sexual assault.

6. He created “Rugmark” which certifies that carpets and rugs sold abroad aren’t made by child labourers.

7. He is the face of Global March Against Child Labor – a large group of as many as 2000 social-purpose organizations and unions active in 140 countries.

8. He heads the South Asian Coalition on Child Servitude (SACCS) which rallies national and international institutions and NGOs to bring pressure on governments, manufacturers, and importers to stop exploiting illegal labor.

9. Despite facing false charges and death threats for his work, he continued to work for his vision.

Two of his colleagues have even been murdered.

10. His work has been appreciated and honoured earlier as well.

He received a grant from the Skoll Foundation, the Freedom Award, the Robert F. Kennedy Human Rights Award, and the US State Department’s Heroes Acting to End Modern-Day Slavery award.
His organisation Bachpan Bachao Andolan made this touching video.

We congratulate both Kailash Satyarthi and Malala Yousafzai for winning the honour.

Did you like this? Share it:
Tweet
news Kailash Satyarthi-10 Things That You Need To Know About The Indian Who Just Won The Nobel Peace Prize